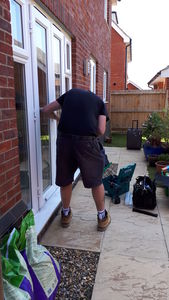 Well…. I finally managed the move to my new house in Norwich, leaving behind Harrow. No regrets about leaving Harrow, except for the friends I made there.

Breaking Into My New House

As with the entire process, the “moving in day” wasn't without stress – because I couldn't get into my new house! There was a misunderstanding with keys and the house keys were locked inside the house instead of being passed to me by the estate agent. Sigh… 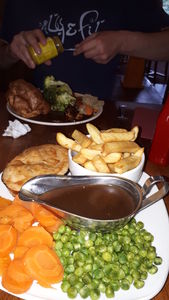 My elder son was with me to help me on the day of the move and when we found we couldn't get into the house it was after closing time for anyone who might have helped us, so there was nothing for it but to sample a meat pie at the local carvery. A consolation meal!

So the picture shown is of the emergency locksmith breaking into my new house the next day. Looking on the bright side, it's one very secure house!

No Internet, No Emails

Another trying aspect of the move was that the Internet connection that had been promised for the day after my arrival was promptly cancelled because BT couldn't allocate me a line.

With all orders for new services and furniture / fittings being placed online and reliant on emails, I was tearing my hair out and anyone who said “Ask Google” was likely to get very short shrift from me.

I'd arranged temporary Internet cover with a dongle, but totally underestimated the “amount” I use, even without any heavy duty access. Of course forgetting to switch off my cloud back-up couldn't have helped, so by day 4 of the month I'd used up 80% of my monthly allocation – and upgrades are not permitted in the first month.

Happily my younger son loaned me his off-site dongle which was a life-saver. I just hope I didn't use up all of HIS monthly allocation.

It's quite worrying how dependant I have become on my Internet / emails!

A Place For My Stuff

Sadly a major problem has been getting a house big enough for all my “stuff”. Originally touted by my sons as “Mum's downsizing”, I very quickly realised that I had no intention of “downsizing” – I just wanted to relocate. Helped by the fact that I have moved from Harrow, where house prices are high, I have been able to buy a lovely house for much less money. So although I have had to dispose of much of my “stuff”, probably too much of it has accompanied me to Norwich.

I'd been in my home in Harrow for well over 30 years, and “stuff” just accumulated. My stuff, both sons' stuff, my ex-husband's stuff, stuff inherited from various generations of my family and, last but not least, stuff from my late partner John who died about 4 years ago. 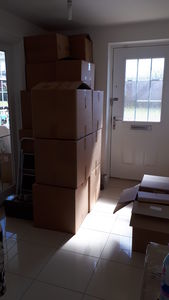 Here are just a few of the boxes of my “stuff” – waiting to be unpacked in my new house.

To most people it was just “rubbish” and everyone urged me to “get rid of it”. To some extent I have had to, because it was crazy to keep dragging everything around with me – and I had to admit that most of it hadn't seen day-light in years. But it hurt, and brought the memories flooding back – both happy and sad.

I am very regretful about the amount of money I have wasted over the years on “stuff” that was barely used.

Also, after I needed to box piles of “stuff” to make the house attractive for potential purchasers over the 6 months that it took to complete the sale and purchase, I had to concede that I'd been able to manage without much of my “stuff”.

In the final few days up to the move, there were van-loads to the tip and car-loads to the charity shop, and even having moved in I am still packing “stuff” into boxes to take to the local charity shop. No – I shouldn't have brought it. My sons were right, and I was wrong.

On the night after the removal men finally unloaded the last box of “stuff”, my elder son sent me the video below – which just about sums it all up.

George Carlin – A Place For My Stuff

Obviously I have NO copyright for this, it's published purely for your enjoyment and my shame 🙂

2 Tips for Pricing Your Products and Services

What To Learn About Online Business From The Crafty Fox

10 Tips to Stay Effective While Working from Home

I left it too late to plan for a financially secure retirement. Don't make my mistake. Start building an extra income with a part-time (or full-time) business online. Think you don't have time? Can't afford the start-up cost? Can't meet sales targets? Contact me for free advice (no obligation) on the best fit for your circumstances. 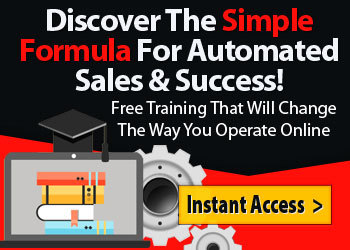 Check These Posts Too

Trending Posts
Recent Posts
Business Ideas
What Is Your Core Blogging Intent? 7 comments
Unmask Your Dreams: 7 Steps 6 comments
Do You Evolve as a Blogger? 5 comments
Never Sell Out on the Way Up 4 comments
2 Tips for Pricing Your Products and Services 4 comments
DesignCap: Simple Graphic Design – Features and Benefits May 31, 2020
Do You Evolve as a Blogger? May 26, 2020
Why A Fast WordPress Host Is Critical May 23, 2020
What Is Your Core Blogging Intent? May 20, 2020
Unmask Your Dreams: 7 Steps May 17, 2020
Why You Need Viral Traffic Boost – Or Not? 3 Pre-requisites April 30, 2020
Becoming ADA Compliant, Why I’ll Never Be Rich April 21, 2020
2 Secrets To Make Commission Online With No Outlay February 11, 2020
How to Quickly Break into a New Niche February 3, 2020
Risk Free Trial Of: Anything January 2, 2020

Earn ad views at LeadsLeap below

Thanks for free CCO images mostly from: Pixabay.com and MorgueFile.com and Pexels.com
We use cookies to ensure that we give you the best experience on our website. If you continue to use this site we will assume that you are happy with it.OkPrivacy policy